Monday 13th March 2017, Huamei International School welcomed travelling Youth Football School from Pakistan (Karachi United FC) to their school for a friendly language exchange. During their time here, they were asked to take part in a friendly football match against the GIA programs U12 boys football team coached by PE Teacher Mr. Lake.Huamei School GIA program have a good and well organized U12 boys football team whom have competed against many different International School around Guangdong. Huamei International School U12 boys team are currently ranked 7th in the footballing scene in Guangdong. Therefore this game would be a greattest. Karachi United who have been playing together for more than 6 years have given the U12 GIA boys a chance to compete and play against ‘semi professional’team. The game was 7vs7 and both teams were excited to play and it was a veryexciting game. Huamei U12 battled hard against well-organized team, tackling hard, passing well and never giving up. It was clear to see that the PakistanYouth group new each other well and showed their high level of footballing ability on the pitch by moving the ball quickly, finding the open space and have a free flowing system running between themselves. Huamei managed to take a number of shots on their goal but unfortunately unable to find the net to score but a very good performance and a proud teacher. I couldn’t be happier to see my students compete and never give up against a team who were well organized, well drilled and very talented. I would like to congratulate their coach for doing a great job; it was a pleasure to meet them and to play with them. Special thanks to Matt Grade 6class 2 and Nicole Grade 6 class 2 for stepping forward as team leaders and helping me run the team whilst I was running around as the referee. It has just shown what progress Huamei GIA U12 boys team have made, they are now competing with a high leveled team who have a great knowledge and understanding of football and Huamei International School GIA U12 boys NEVER GAVE UP. 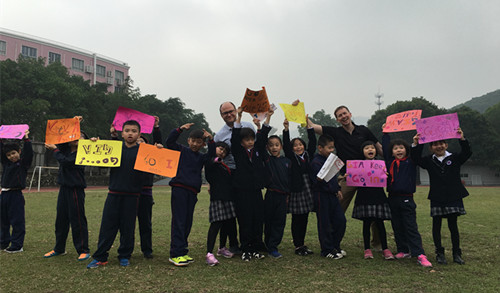