To have a host family’s accompany has always been the best part of our journey, in which we can learn from them in every way and enjoy the local life as they do. 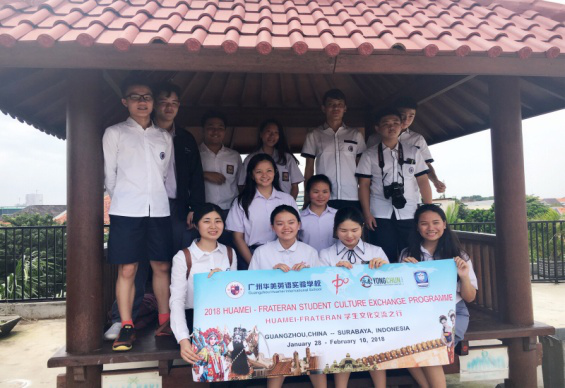 My host girl, Jennifer, has been the fourth generation of the Chinese migrating to the South Sea in the 1930s. Indonesia’s first recorded Chinese settlement can be traced back to the 11th century, and by the 17th century, Chinese Indonesian were already taking important roles from all walks of life. Today they are continuing to contribute to the national economy by taking care of business settled through decades of hard work. It evokes a sense of awe in me when I imagine their great perseverance and diligence. Though taking over the family business is a much easier approach to a life career, Jennifer and her older brother Michael, both high school students who usually discuss homework until midnight, are aiming for otherwise. I also learned an interesting fact about the elders’ willingness to work even after 80 as they think continued working life would protect them from dementia. Later on I learned there’s actually science underpins that for senior citizens’ active social life getting from work could be the reason for a life of longevity and health.

What efforts have those ethnic-Chinese Indonesians made to settle down on those islands over the centuries? Through the 13-day experience with a superficial view, I think the most crucial part is showing respect, tolerance and embracive towards people from different cultural backgrounds. Here it’s an everyday common scene to hear broadcasting prayers from big or small mosques, smell smoke from burnt insence in well-tended temples and see brick churches with open doors for guests. Then I realize how indispensible it is for the majority of the country’s population to pursue their spiritual life as an important tradition in an urban era. Apart from various foreign beliefs(because Islam, Hinduism, Christianism and the like are adopted beliefs in history) the original indigenous customs coming from the sheer vast size of the country also contribute to the splendid cultural mixture which is a really impressive fact. Perkumpulan Hwie Tiauw Ka is a historic Chaozhou guild building for anyone who is interested in Hakka community living in Indonesia. We were very impressed with the hardship endured and great effort made by the founders to sustain the organization.

One common interest Mrs Cheng and I share was shopping for batik clothes. She almost has a collection of batik clothes and she’s also passionate about shopping for more. The making of Javanese batik was believed to be a common scene since the 12th century. And it’s not clear about whether the skill was borrowed from India then. The making process is very much like the way the minority group does in Southwest China. In history the batic clothes were used as a tool to show off wealth and status in court with certain patterns represent particular rank for the aristocracy. Then it became widespread among the common people and kind of become national clothes both for casual and formal occasions. As the handmade batik is generally time-consuming and expensive, it’s more common to see printed batik clothes on the fashion industry. As it was shown in a gallery in Kadipaten Prawirodirjan, the artists do the design and drawing of the pictures, and the wax printing part is left for others to finish. Listed as an intangible cultural heritage by the UNESCO, it’s a happy scene to see the craft is reasonably valued and loved by the local people. So tourists can come to enjoy, celebrate and be marveled at its beauty. In Mr Hari’s amazing art lesson, we got to experience the magic making of batik paintings. To me the moment to stand the pungent smell of the boiled wax was more difficult than designing and drawing. It struck me with deep admiration to the creativity and patience of the wax artists. 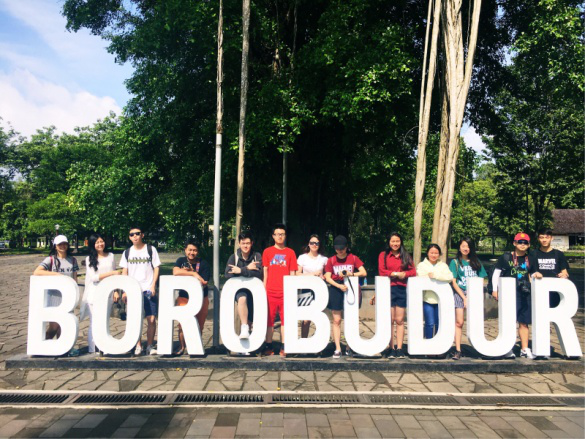 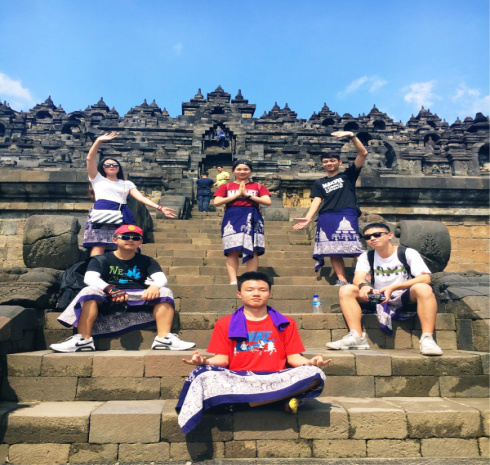 Local food, after all, usually also provides a glimpse into the uniqueness of local people’s daily life and how they adapt to their environment by forming this diet habit. Mrs Cheng had been busy filling the dining table full with various foods as she could to show me the diversity of Indonesian food and taste. Back home the Taoist philosophy remind us of the tendency to get inflamed after consuming too much fried food with strong flavor. But here it seems all reasonable to have food like this for replenishing energy in such a tropical region. Main dish, like fried chicken and fish, as well as street side food vendors offer all kinds of fried food. The sweet and spicy condiment, Sambal easily gets along with any meal. The other thing that unites the country of archipelago, in my eyes, is the sweet iced red tea Eh teh manis, which is famous for its mild flavor and its ability to wash a meal’s spicy burn away. Back in school, the history teacher Ms Maria cooked Nasi Kuning, the yellow rice to celebrate our arrival on the school like they do for a festival. We were so lucky to be treated like honored guests to get to try the food. It’s shaped into a cone with potatoes, meat balls as sidedish. Just like red is the color of luck and joy in China, yellow is the color that stands for happiness and celebration. As she explained to us, the cone-shaped rice is like a mountain with the top symbolizing the heaven and the bottom all people, and the design of the plate means the multitude look upon to and show respect to their Gods. Besides, the various flavors of the ingredients stand for the different taste of life experience. That’s an intriguing example of how food making infuse the idea and belief of its people.

A family life is very much valued. Mrs Cheng, Jennifer’s mother, managed to get involved with every activity the cultural exchange program covered. Parents from the host families in this program gave speeches both on the opening and closing ceremony in the school’s hall and actively participated to discuss about the possible improvement that can be made to the next year’s program. It seemed they were so concerned about what’s happening in their children’s school and they always have time for it. It’s awesome those parents appear to be successful to have a balanced family life and busy work. Furthermore, I used to think all Asian parents are protective of and demanding to their children. But it does not seem so here. Parents are having a relaxed view towards their children’s future. The kids are allowed to have their own thinking on this. It makes me wonder if less worried parents may come from a society’s a less competitive job market.

A happy smiling grandmother speaks perfect Chinese. A working late father enjoys listening to Chinese songs even though he does not understand the lyrics. A brave mother who would like to host Chinese guests without speaking Chinese or English and be forced to use body languages frequently, takes good care of the family as typical Asian mothers do. Four children with two pairs near their ages always keep each other’s company and keep filling the house with lots of joy and laughters. That’s the loving picture of my Indonesian host family when I include them in the circle of my own culture. Being part of this family has been my favorite in this trip. It is such a great luck to be able to meet and get to know those amazing people. And I’m also very grateful for the different perspectives Indonesia has offered me to reflect on my own identity, for this reason I love Indonesia.