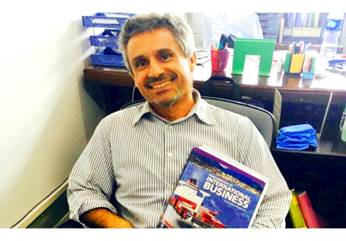 I would like to take this opportunity to wish Huamei International School a happy 25th silver anniversary.  It is an honor to be the principal of Huamei-Bond International College and to be associated with the Huamei International School of Guangzhou, in the wonderful city of Guangzhou, China. Twenty five years ago, that is a quarter of a century ago, a few bright minded and motivated young educators embarked on a mission, a mission to start a school.  As I have mentioned before, I believe that starting a school is probably one of the most honorable things that anyone can be involved in, in all of human activity.

I have first-hand experience in this area as I too, as a young teacher, had embarked on such a mission. I had co-founded an Ontario school that operated in a small European Mediterranean country. I ran the school for ten years and the positive effects on our students, their families, the teachers and the local community has been everlasting. To this day I still receive communication from some of the hundreds or even thousands of people that I met during the ten years. I am sad that that chapter in my life came to a close, but I am ecstatic that I was a part of it. I learned very quickly that education is not easy, let alone private education. Running a private school means maintaining a fine balance between academic decisions and business decisions. A private school does not come with unlimited resources and the principals must always be cognizant of the constraints, but must ensure that those limitations are not adversely affecting in any way shape or form the learning community by jeopardising the academic program and the needs of the students. The school principal must be true to the school’s mission and the academic expectations and safeguard them passionately. As a private school principal, I try to err on the side of the academic program rather than the business. This means that I try to use the resources effectively and efficiently for the purpose that they were meant for, and that is educating our students.

By running a private school, I quickly learned that a school is a member of the global community and is directly affected by world events. In the ten years running my school, I survived 9/11, world-wide epidemics like SARS, the introduction of new currencies, in my case the introduction of a hard currency such as the Euro that was and is much more expensive than the Canadian dollar, I survived high levels of inflation in a small ever-changing country with a population of merely ten million people total, I survived natural catastrophes, and even the threat of war. When you are trying to convince parents to send their children five thousand miles away from home under these conditions, you can imagine the difficulties and the problems that we faced. But because we had a good program in place we were successful, and the students were growing in numbers year after year.  This is what is happening at Huamei, it is growing. I am thrilled because I can continue my dream at Huamei. Here I found similar-minded educators that share the passion of education. I found a school that acts as a bridge between East and West. I found a school where I can trace my students’ origins! For years I have taught students from many parts of the world. I had many students from China. They would describe to me their place of origin and I could only imagine what it would be like. Now, I am actually living there. I am discovering the intricacies of learning a new language that is so different from yours. I am learning ways of teaching English based on learning how the Chinese language is put together. By learning these details, I can quickly see why students make the grammatical mistakes in English that they do. I understand where it is coming from and I can find ways of teaching English to the Chinese student. I am learning that it is different to teach English to a German than it is to a Chinese or any other nationality. As an educator I never stop learning and improving my teaching strategies, my skills, and my knowledge.

As a principal I still believe that I should teach at least one class per year so that I have that close proximity with the problems that the students, but also the teachers face. It gives me a better insight on the issues at hand, therefore helping me to problem solve. I am happy that at Huamei I have found an open mind and ear that will listen to suggestions for the betterment of the school. Positive input is always embraced and promoted. Running a school with a double program, Canadian and Chinese, is not easy at best, but I found mutual respect, understanding and cooperation by staff and administration on both sides. One learns in business schools that the biggest problem in any organization is communication. At Huamei, communication is an even greater challenge with Chinese, Canadian, American and German programs running concurrently!  But Huamei stands the test of time, beating all odds even in this area of concern. I am very fortunate to be part of such a community.

I am delighted that I could take responsibility of HBIC in my current position as principal, after leaving a similar one that I had created. I empathise, and I share in all of Huamei’s concerns for the future, but I also embrace the challenges that Huamei has taken on and I share in their dream to build the best school in Southern China. I understand that Huamei will start new and great plans for the school. I am happy for the Huamei learning community, I am happy for the students, teachers and parents of the future. I look forward to doing my part in developing those plans and sharing in the dreams of my fellow educators, but most importantly in the dreams of my students. I look forward to being invited back to the 50th year golden anniversary as a returning former teacher.

From the bottom of my heart I wish every man, woman, and child associated with Huamei a Happy 25th Anniversary!